I refer you to the “Annual Report of the Council of Economic Advisers.” It is said to be a document of 357 pages, but all I know of it is what was printed in the New York Times, which is enough. In the section headlined “Why Deficits Matter” we find the following:

“Financing a budget deficit may draw on private saving and foreign capital inflows that otherwise would be available to the private sector …. Weak and marginal borrowers may be ‘rationed’ out of the market by higher interest rates unless saving flows are adequate…. During a recession-as now exists-the borrowing requirements of business and consumers tend to be relatively small. At such a time a given deficit can be financed with less pressure on interest rates than during a period of growth…. Much of the Administration’s tax program is designed to increase the private saving of the nation. As a consequence, both public and private borrowing will be accommodated more easily.”

What (if anything) is being said here? Restating the argument, it goes like this: First, the Administration’s tax cuts are a net addition to an already existing deficit. Second, government borrowing will have to go up to cover the raised deficit. Third, there will be no trouble with the increased borrowing, provided the recession continues (or deepens)-and the people who receive the tax cuts lend the money back to the government.

In short, at the end of the circular maneuver-assuming it works as it is intended to-the recession will be just what it was, and sizable transfer payments will have been made to people judged not to need them. In fact, they have been chosen to get the money precisely because they don’t need it. Also (incidentally) the deficit will be increased, and interest at 14 per cent or so will have to be paid on that. It adds up to real money, and it’s crazy, no matter how you look at it.

Let’s imagine (as I’ve remarked before, economists have to have good imaginations) that we had a Republican administration that knew something about finance. It would occur to such an imaginary administration that it would be simpler to keep the tax money it has, instead of returning part of it to rich people in the hope that they will lend it back to the government. Not only simpler but, of course, cheaper. Not only cheaper but, of course, less disruptive of the economy. Not only less disruptive of the economy but, of course, more equitable.

I don’t know what I’d do if I were a supply-side economist (my imagination isn’t lively enough for that). The supply-sider’s game plan is to put money into the hands of producers, who will invest it in new plant, which will eventually improve our productivity and make possible a higher standard of living for us all. He’d have to be blind not to see that, in general, producers are richer than other people. Thus to get money to them, he cuts taxes for the rich rather than for the poor or even for the middle class. He’s playing for the trickle down. Fair enough.

He recognizes that when taxes are cut faster than expenditures, the Federal deficit (not to mention the state and local deficits) rises. The Laffer Curve doesn’t say there won’t be an initial deficit rise; it merely promises, as President Hoover did, that prosperity is around the corner. So Jack Kemp isn’t worried about the deficit; he’s going for the long ball.

Nevertheless, the deficits have to be monetized or funded. Monetizing the debt means just printing money to pay the bills, and supply-siders are afraid to do that. The deficits therefore have to be funded. That is, bonds have to be issued to cover them. But one doesn’t simply issue bonds, one sells them. To.whom? Why, naturally, to the rich. No one else has the money to buy them. Unfortunately, the money the rich use to buy the bonds is the money they were supposed to invest on the supply side.

Try as he will, the supply-sider can’t get money into the hands of producers. This is not because of the conspicuous consumption of the rich or the notorious perversity of Wall Street. Even when everyone is doing his best to cooperate, the scheme can’t work. The supply-sider’s tax cuts go to the rich, all right; but the recipients have to lend the money right back to the government to cover the deficits. No more money becomes available for productive investment than there was before the game started.

Actually, even less is available, because the pressure of the deficits pushes up interest rates. This doesn’t have to happen, yet it will happen as long as the Federal Reserve Board clings to its monetarist doctrine of restricting the money supply (if it could only figure out what money is). You may be sure that the Fed will depress both the supply side and the demand side if it can. The resulting high interest rates will increase the cost of government borrowing and add to the deficits in what is now a pretty tight upward spiral. But that’s not the end.

High interest rates inhibit investment. Businesses that used to borrow money to expand in the good old-fashioned capitalist way can’t afford to pay 15-20 per cent for their money and have to cut back in order to survive.

Hence the supply-side tax cuts, with the best will in the world, will reduce the amount of money available for investment. You will note that I say” available,” because I don’t for a minute believe much of that tax windfall would go into productive investment even if it could. Almost all of it is earmarked for speculation. No goods will be produced as a result of it, nor any services rendered. But the rich will be richer.

TO SHOW what I mean about speculation, let me call your attention to some figures the Times printed a couple of weeks ago about Merrill Lynch, Treasury Secretary Regan‘s old firm and, breeding apart, the very model of a modern “investment” house. It turns out that by far the biggest part of Merrill Lynch’s income comes from interest its clients pay on margin accounts. Margin accounts are nothing if they are not speculations, and interest on them is 45.4 per cent of Merrill Lynch’s income. Next we have commissions, which amount to 22.8 per cent of their income, and the transactions the commissions were earned on were also speculations, buying and selling securities, without a penny of all those billions going into new productive enterprise.

Then comes “investment banking,” 8.6 per cent of income. That sounds more like it. Well, it sounds more like it until you hear what the small print says. Then you learn that “investment banking” includes “municipal and corporate underwriting and merger and acquisition advice.” Of this, the only part (and we don’t know how large it is) that might concern productive investment is the corporate underwriting, but even that is unlikely, coming in close conjunction, as it does, with “merger and acquisition advice.” Was Merrill Lynch involved in the $3 billion US Steel borrowed to buy Marathon Oil, or the $4 billion DuPont borrowed to buy Conoco? I don’t know, but I do know that transactions 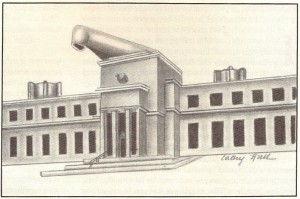 like that are speculations, not productive investments. No more oil is refined- no more anything is produced- as a result of them.

Yet this is the sort of thing-and the only sort of thing-that is encouraged by the supply-side tax breaks. Don’t get me wrong. I’m in favor of producers; after all, I’m sort of one myself. The late Professor John William Miller used to say that an entrepreneur is an economic surd: there’s no accounting for him, but you don’t have any economic activity at all unless some willful character says that, come hell or high water, there’s going to be this here-now business. Such types should be encouraged. I’m willing to believe that at least some supply-siders want to encourage them. But I’m here to declare that Reaganomics is going to encourage only those whose principal activity is clipping coupons.

Let me, as the fellow said, make myself perfectly clear. I’m not arguing against a deficit or against tax cuts, or for them. All I’m saying is that unless the government is running a surplus, there is no way for tax cuts to be a direct stimulus to productive investment [editor’s bolding]. Tax cuts can be an indirect stimulus: By giving some people more money to buy things, they can eventuate in producers producing more. But that is the demand side, not the supply side.

To be sure, Reaganomics has its demand side: the military buildup. Because of its specialized nature, this is not the most efficient stimulus the economy could have; it produces comparatively few jobs for a buck. Moreover, it cannot continue to stimulate the economy even as much as it does unless the arms race speeds up. (That may rate as a suitably dismal thought.)

If you really want to stimulate the demand side (which you really ought to want to do), you will give tax breaks to people who will spend their windfalls, not “save” them. In short, you will start cutting taxes at the bottom (Social Security taxes, for example) and work tentatively upward. This is the precise contrary of Reaganomics, but it makes precise sense.