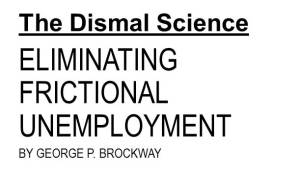 IN MY January column (“Loving and Working,” NL, January 10), I made an offhand comment to the effect that Federal tax treatment of depreciation, interest, and state and local taxes contributes to frictional unemployment. A professor at Berkeley has challenged me to tell how. I’ll try.

First, let’s understand that I’m talking about the sort of unemployment that is caused when a factory or an office or sometimes a store pulls up stakes and moves to another town or state in hot pursuit of lower taxes or a tax moratorium.

I’m not talking about moves motivated by a desire to get closer to supplies or markets, or even to find cheaper labor, though all are in fact encouraged by the present tax laws.

Second, let’s agree that the malign effect of the present irrational treatment of depreciation is too obvious to need much discussion. As things are now, I can build a million-dollar warehouse, depreciate it down to almost nothing, sell it for a million or more, pay capital gains instead of regular income taxes, and repeat the process somewhere else. If that’s not bad enough, the company that buys the warehouse can depreciate it again. You don’t have to build anything to play this game, though that’s what its apologists would have you think they’re encouraging. The practice is known as tax sheltering, and it’s also done with shopping malls and condominiums and nursing homes and Broadway musicals. It should be stopped. It would not be easy to do so.

Third, let’s at least keep an open mind on the treatment of interest expense. It’s worth a separate article, and I’ll try to get to it another day.

Here I want to talk about state and local taxes. And I want to advance an idea that may appear startling but is already in operation, in modified form, in the new treatment of estate taxes.

What happens under the existing tax laws? Let’s say you wake up one morning and find yourself mayor of a city a whole lot like New York, with the center running down and thousands of people unemployed and the place pretty near broke. So you hustle around and button-hole some friendly bankers and hard-working brokers and beg them to build shiny glass skyscrapers and move their offices to your city. Or at least not move out. With all the unemployed, you say, there’s plenty of cheap and eager labor available.

They pat you on the shoulder. That’s not good enough, they say. There’s cheap and eager labor everywhere; that’s why we have this depression. The trouble with New York, they say, is the taxes are too high. Besides, the traffic is terrible, the subways have been turned over to young punks to wreck, there aren’t enough cops even to keep the muggers out of the nice parts of town, and it is impossible to get a taxi when it’s raining.

You say, gee, taxes would have to be raised sky-high to take care of those things. They shrug and threaten to move the Stock Exchange to the Jersey meadows, where they’ve already moved the Giants, which used to be a football team, and are talking of moving the Yankees, which used to be a baseball team. A guy can’t make a buck in New York, they say. At least he can’t make as many bucks as he might in a lot of places that have a better understanding of the problems of running a business. Like Cleveland.

Like Cleveland, you repeat tonelessly. For you know that Cleveland has certainly been sympathetic to business, enticing companies to come and build by offering them tax gimmicks they can’t refuse. You also know Cleveland is broke. Worse off than New York as a matter of fact.

This little scenario can be re-enacted right across the face of the land. Every town big enough to have a Rotary Club or Kiwanis or Elks has a committee busily making calls on nearby industries, or writing letters to a list somebody has. Mindlessly compiled (I’m on most of them), or sending out more or less professional looking circulars extolling the town’s advantages. The advantages are the people, who are friendly and hardworking, and the countryside, which is beautiful, at least at certain times of the year. But this approach seldom gets very far, because, as the Rotarians would insist on other occasions, and actually sing at their luncheons, America is a beautiful country populated by friendly and hard-working citizens. On this basis there is no reason for locating your factory in one town in preference to the next.

What it comes down to, the committees eventually learn, is taxes. This presents a problem, given that one of the reasons for going after new industry in the first place – was to broaden the tax base. The whole effort becomes a standoff and nothing more is heard of attracting new industry, except for ritual platform planks at election time.

That is what happens in most towns. Elsewhere the real estate speculators are so strong, or the unemployed so many, that an accommodation is reached. One way involves hanky-panky. I have heard tell of a Fortune 500 company sending a town official’s son to college to protect a $25,000 tax abatement. Since $25,000 isn’t much to a Fortune 500 company, I was speechless when I first heard of this, and I still am, but the story does indicate the cool passion with which tax advantages are sought.

Of course, a similar reduction can be achieved-and, I trust, generally is achieved-legally. Factories are seduced with tax breaks, or with low-interest loans from a public authority, or with both. A state like Connecticut goes out of its mind trying to make do without an income tax for fear of losing what industry it has. A state like New Jersey legalizes gambling in Atlantic City, at the risk of completely corrupting its politics, in the vain hope of keeping taxes down. A state like New York sees its infrastructure disintegrate and its services decline as carpet factories leave Yonkers and steel mills shut down in Tonawanda.

The standard view of the frictional unemployment that results is that it is one of those zero-sum games. A lot of people lose jobs in Ohio, and the same number of people (or almost) get jobs in Oklahoma. Hard cheese for the former; jolly good for the latter. It all evens out.

Well, there are states and municipalities involved, and what happens to them is that they have to go to wrack and ruin to avoid taxing business. Giving and receiving are equally cursed. The state that loses industry loses tax income and is saddled with additional welfare costs. The state that gains industry has to come through with the highways and water supply and sewers and what-not it promised to lure the industry – yet it can’t tax the industry, because a tax break was part of the lure. Both ways, our states and municipalities are in trouble. As a consequence, our cities – all our cities – are a mess. We’re all hit where we live. Our civilization is not so civilized as it was, and its decline is accelerated by the same forces that make for frictional unemployment. This is what people mean when they say you can’t stop “progress” (quotation marks added).

And it would indeed appear that, given our federal system of government old federalism or new – there’s no way states and municipalities can be stopped from playing beggar my neighbor. The British Parliament can tell the county councils what to do and how to do it. We don’t have that system, and the country is so big and various it wouldn’t work here, anyhow.

IN JUDO (so I’m told), the trick is not to work against the other guy’s strength but to get it working for you. Various kinds of schemes have been proposed to keep industry from running away to greener pastures: mandating public members on boards of directors, requiring long notice of plant shutdowns, special taxes or performance bonds to pay for worker retraining.

But these schemes suffer from two fatal flaws. They are certain to become entangled in endless litigation; and they are liable to the same sort of pressure that industries exercise on taxes. No industry in its right mind would locate in a state that had such provisions in its laws. So no legislature in its right mind would enact them.

Still, there is a judo-like solution. If state and local taxes were not merely a deduction but a 100 per cent offset against Federal taxes, then state and local taxes would have no direct bearing whatever on a corporation’s (or an individual’s) total tax bill, and industry would have no incentive to flit hither and thither in search of tax breaks. Moreover, industry would also have the possibility of showing a real – as opposed to a public-relations – concern for the communities where it located and would no longer tend to oppose expenditures that might make these communities better places to live. The result would be something vastly superior to the Model Cities plan (which wasn’t so bad as people say), because it would leave it up to the cities themselves-all cities, not just the models – to decide whether and how they wanted to become civilized. This would make local politics – and hence all politics – meaningful in a way it is not currently. That’s a plus.

Now, it’s conceivable that some wise guys in a sleepy village might try to tax their town to build an Olympic stadium, or some nature lovers might opt for the world’s largest botanical garden, or dwellers in a cold climate might want to build a glass dome over their entire city (this has actually been proposed for Winooski, Vermont). Probably the best way to abort such undertakings would be to limit allowable state and local taxes to a certain percentage of the previous year’s, giving Congress the power to change the figure from year to year as fiscal policy required. Thus, for the first time, a comprehensive fiscal policy would become possible. And that’s a plus.

The Federal tax rates would of course have to go up – though revenue-sharing, as such, would be abolished. Constant readers of this column may suspect I’d then argue for a more steeply progressive income tax, but that’s another question. The present proposal should help keep our states and cities from going down the drain. At the same time, frictional unemployment would be greatly reduced – and employment is what it’s all about.